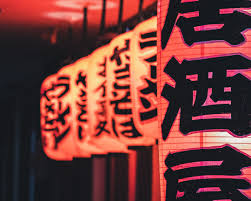 Japanese characters or letters have two sets of alphabets and one set of ideographic characters.

The second set of alphabet is called “Katakana” and it also consists of 48 characters.
Actually, Hiragana and Katakana are sets of characters which represent the same 48 sounds, but in different styles.
For example, the above example “すし” would be written “スシ” in Katakana. It pronounced the same, but the characters are different.

Kanji is the third set of characters used in Japanese. It is not an alphabet. It is an ideograph meaning each character represents a meaning instead of a sound.
For example, “木” means a “tree”. It can be read in several different ways, but it always represents a tree.
It can be pronounced “kee”, “moku”, “boku” and “koh”.

To explain the history of Japanese writing system, I will have to flip the order and start from Kanji. Because Kanji is basically a copy of Chinese characters and those characters have much longer history.

– How Kanji came about and used to Japan

Kanji characters date back to 1300BC, when people in China started to engrave the characters on mail of turtles and on bones. By the 6th century, the writing system has developed into the set of characters we use today.
These characters were introduced to Japan by the 5th century.

People in Japan started to use those characters to represent the sound of Japanese just like native Americans used English letters to express their language in “Cherokee alphabet*”.
In Japanese case, it is called “Manyo-gana”. It had no connection to the meaning each Chinese character represented as an ideograph. It used one letter for one syllable, just like current Hiragana and Katakana.
For example, sound “ya-ma” means a mountain in Japanese.
In Chinese character, a letter that means a mountain is “山”.
Instead of using that letter, Japanese decided to use one letter for each syllable as in “也麻”.
Manyo-gana is not used in today’s Japan as we have Hiragana and Katakana to simply represent sound. But actually it was quite prevalent until those two sets of alphabets were invented in sometime between the 9th and the 12th centuries.

For example, “I saw a mountain.” can be written like this. “山を見た” (pronounced “Yama wo mita”).

The Kanji letter 山 reclaimed its original meaning as a mountain, although it is pronounced “Yama” reflecting Japanese term for a mountain. Chinese will pronounce the letter with completely different sound, while the character represents the same thing, a mountain.

見 means to see or to view in China. So, Japanese uses the letter in the correct context, but with different pronunciation.

– Hiragana: what it’s used for and how we use it to write our names as a child

Hiragana is the major set of alphabets in today’s Japan.

Out of 48 characters, one letter is a single consonant, 5 letters are single vowels and each of all the rest represents a syllable that combines a consonant and a vowel.

This is the first set of characters you learn in school. Although most of Japanese names are in Kanji, everyone starts from writing their names in Hiragana representation.

For example, my name is “大河内知子” when written with Kanji, but doesn’t it look too complicated to write for a 6-year-old kid? So, they first taught me Hiragana and I wrote my name following the sound of name as “おおこうちともこ” in Hiragana.

I learned the first and the last Kanji letters in my name in the 1st grade, then they would ask me to write it with the combination of Kanji I know and the rest in Hiragana as “大こうちとも子”.

The number of Kanji letters in my name increased as I learned more Kanjis and by the time I got to the 6th grade, my name consisted of only Kanjis!

– Katakana: For what purpose do we need another set of alphabet?

Katakana is the minor set of alphabet in today’s Japan, but actually it is said that Katakana was the first set of alphabet to be invented. They simply took a part of Kanji to make a simpler letters that was not an ideograph and was easier to express the sound of Japanese.

At first, Katakana was used mainly by men in their academic and sometimes religious pursuit of reading Chinese literatures. They used a code that preceded Katakana to take notes.

In today’s Japan, Katakana is used to represent foreign words. As such, you name will be most likely represented by Katakana when written in Japanese.

Most of country names are written in Katakana except China and Korea where we share (or used to share) the characters.

Words like “ice cream”, “apartment” and “computer” did not exist in Japan before the concept or the product itself was introduced to Japan, so they preserved the similar pronunciation from the original English word. e.g. “アイスクリーム (eisu-kureemoo)”, “アパート(apahto)”, “コンピューター(konpu-tah)”.

Now I know English, German and French. They are all unbelievably simple compared to Japanese when it comes to writing.
I also know Korea decided to stop the use of Chinese characters to simplify their writing system decades ago.
Even China, the original founder of Kanji, decided to simplify each character*2.

In my personal opinion, I think Japan should think progressively in terms of writing system.
When I say “we should stop using Kanji”, people look at me as if I’m crazy or I’m some kind of a rebel. But no, I’m not a rebel. I love Japan, I love the history, I love kanji and its beauty and intricacy. I am just thinking about the country’s future in this Internet age.

Ideographs convey meanings and makes it easier to read and/or express something. But it hinders children’s learning. Children in Japan have to learn 1000 Kanji in 6 years in elementary school. Significant amount of school time is spent on teaching and learning new letters.
But the biggest problem is not the time, but the huge obstacle Kanji creates in front of kids who want to learn more.

When my son was 7, he was very interested in ancient Egypt. He wanted to read books on that topic, but all the books we found had too many kanjis that he could not read it to get the information.
All books written for children have designated target age in Japan. But some kids have interests that go beyond that.

In the case of my another son, he wanted to learn coding at the age of 8. But this time, because he could understand English, he had no issues “decoding” what’s written on online resources about programming. By getting information online by himself, he got into it pretty quickly.

Schools in North America and other countries have started to utilize Internet in their education. They encourage kids to google the information and create presentation based on the research they’ve done on the internet.

That can never be possible in elementary schools in Japan.
Kids are limited to books and resources written for their ages.
Don’t you think that is such a limitation in education?
I do. That’s why I think it’s time for Japan to stop to be fixated on what “ancestors have invented”, which was suitable for their time but not for us today.

Sometimes you need to look ahead instead of being attached to what you have. I know it’s hard to let go of what you are used to, but you’ve got to change to adapt to the new era.

That being said, I have no hope it will change. Japanese people have very very hard time changing what they are accustomed to do. Things like education system take decades to change even a bit. Many people believe kanjis are intellectual and knowing more complicated kanjis make them look “interi (intellectual)”. They have never even thought or imagined of writing without Kanji because that’s the way it has been for them.

In my opinion, those intellectual adults’ sentiment and attachment toward Kanji is making the future generation suffer. Information has never been this abundant. Textbook-raised average kids will have hard time surviving in the future with less job opportunities and more focus on skills that are not taught by textbooks.
But again, I can only see it because I have a different perspective knowing other languages and other educational systems. I know it is almost impossible for Japanese in Japan to even get a hint of what I am trying to say here.