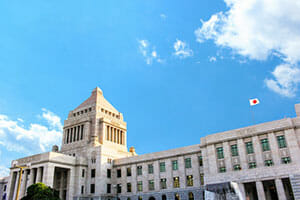 Liberal Democratic Party of Japan or LDP Japan has been in power up until now from its foundation in 1955 for the most of the time. Other parties were in power only short periods: less than two years between 1993 and 1994 and about three years from 2009 to 2012. Why is this party so powerful and what is the reason for other parties not being able to keep the office?

Liberal Democratic Party of Japan (LDP) is a leading right-wing conservative party in Japan. In Japanese, it is called “Jiyu-minshu-to”. Jiyu means liberty. Minshu means democracy. To is a term for a party. It is abbreviated as “Ji-min-to” in most cases. While opposition parties changed, reformed and rebuilt, LDP has stayed as it is for the most time of its history. The party is strongly supported by organizations such as the Federation of Economic Organizations, Japan Medical Association, and Agricultural Cooperative. Most of religious groups such as The Japan Buddhist Federation also strongly support LDP.

LDP is known for its faction politics, or political cliques. Most of LDP parliament members belong to a faction. They pull strings to make one of their members get a position in a government. When their member is elected as a head of LDP = prime minister, their chances of becoming a Minister in the government increases. It was criticized that faction politics causes a Diet member who has no knowledge of the field a Ministry controls becoming the Minister. It is a part of general knowledge for us Japanese that it is bureaucrats in each Ministry who do the actual politics of lawmaking. (The other parties tried to change it when they took office for a short period of time. But of course their members did not have knowledge, either and it ended up with awkward meetings and tie-up in lawmaking.)

Liberal Democratic Party of Japan (LDP) was founded in 1955 by merging two major political parties: the Liberal party (Jiyu-to) and the Japan Democratic Party (Nihon-minshu-to), which were right-wing conservative parties. Although it went unreported in Japan, The New York Times revealed* in 1990s that CIA has tried to influence elections in Japan in favor of the LDP from the 1950s till the end of the 1970s. The intention was to suppress left-wing parties such as the Japan Socialists Party and The Japan Communist Party. It was the era when Japan re-joined the UN, entered diplomatic relations with mainland China (People’s Republic of China) and Japan-US Security Treaty was ratified. Despite of the Lockheed bribery scandals in 1976, the party stayed in power. In 1993, a few factors including the end of the Bubble Economy and Recruit Scandal led to the first fall from the power for LDP. But the opposition coalition government lacked in knowledge and skills, thus LDP quickly regained the office in the following year. In early 2000, LDP enjoyed strong support by majority of Japanese to Prime Minister Junichiro Koizumi. Koizumi stayed in office for five years. Following three prime ministers resigned in about a year each and caused low approval ratings. In the general election in 2009, LDP suffered the worst defeat. This time, it was not a coalition government that took office, but a single party. It is considered the first real transfer of power after the World War II. Left-center party, Democratic Party of Japan (DPJ), took office. But just like three predecessors from LDP, each prime minister lasted for one year only causing the low approval ratings. LDP took hold of the office in 2012 again with reappointed Shinzo Abe as the head. Since then, LDP has been in power with Shinzo Abe in the office.

Why can LDP stay in power for such a long time?

Time for my stepping out the neutral report. I know why LDP has been able to rule Japan almost like an authoritarian government. I said this in my post about Japanese letters and kanji where I suggested Japan should stop using Kanji, but let me reiterate again. Majority of Japanese people resist change. They are even scared of change. By the way, that was the big reason for the coalition party to take over in the early 1990s. LDP introduced GST (called consumption tax). People hated it and approval rate for LDP dropped giving an impulse to opposition parties. Anyway, the push-back is enormous, when you suggest a change: in a PTA meeting, in a neighbourhood community meeting, in a weekly division meeting at work or anywhere. Now you see my logic. People who want to keep the way they are used to are normally conservatives, right? They conserve whatever that they value and whatever that they have now. People who have vested interests support LDP for the same reason. Those organizations I named earlier in this post have established interest they want to conserve. Conservatives are in any countries of course but Japan has a strong general atmosphere that support conservativeness.

That is why LDP can stay in power for such a long time in Japan.

*The 1955 System and the American Connection: A Bibliographic Introduction by Chalmers Johnson