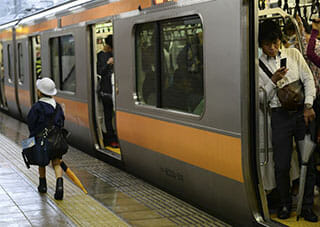 I use public transportations as much as possible when I’m travelling in a foreign country. You get to experience real life as a local. That’s what makes a travel a real experience beyond been-there-done-that in my opinion.

I recommend that you take trains and buses when you visit Japan not only because it’s convenient, but it has some uniqueness that you might enjoy.

Here are some things to keep in mind when you go ride on a train in Japan.

Public transportation system in Japan is amazingly punctual and well organized. Trains in Japan run dead on schedule. Check when your train is supposed to arrive and/or depart on a timetable online or at a station. Your train will come right on time.

When the train is 15 seconds late to depart, chances are you will hear an apology announcement on the train.

Multiple Line-ups on a platform

When you are lining up for a train to arrive, be careful to choose a correct line.

Busy stations have designated lineup areas for different types of trains. Those areas are normally marked with signs such as red circles and green triangles.

Look up to see the electric notice board. Your train’s notice will have the symbol attached to it. Also, don’t hesitate to ask someone who is in the line!

These days, chances are there is at least one person who will understand English good enough to explain it to you.

When you get inside a train station, you will be hearing frequent announcements coming from overhead. The announcements continue on the train. It can get quite noisy sometimes.

Here are some of the things they are repeating for those who are curious with literal translation.

At a platform in a train station:

Rapid train bound for Kyoto will be arriving at platform 3 shortly. Please stand back behind the yellow line and wait.

Please stop making a dash for the train as it may result in your hand being stuck between train doors and it is dangerous for that reason.

(We would like to ask something to) passengers using (this) station. Please stop using a mobile phone while walking, because it is very dangerous.

On a train and a bus:

(We) would like to ask a favor of passengers. Please refrain from using a mobile phone onboard a train, as talking on a phone may bother other passengers around you.

Note: I did literal translation intentionally so you get the nuance.

The content of announcement is nothing unique, but what makes it unique is its frequency. I feel like it never stops when I am riding a train in Japan.

By the way, the same can be said in a supermarkets or department store. They constantly inform you how you should behave so that you don’t bother other people around you in addition to sales and events information.

If you are not women and/or travelling with non-women, be careful not to get on one of these train cars.

Most train companies who have women-only cars only operate those cars in morning commuting hours. It is a measure against gropers on a crowded train.

I am one of women, but personally I avoid women-only cars. It’s not that I don’t agree with the idea of safety and keeping stress-free commute, but it’s just because I am sensitive to perfume.

Issues with gropers are big in Japan. Sometimes it is in the news especially when someone is trying to prove their innocence when falsely charged for molesting.

I was molested when I was 18 in Tokyo. It was such a common thing back then, I didn’t even think of reporting it. But I regret not doing so.

The rule of priority seat is the same everywhere. But Japan has one additional rule that you should be careful about.

You are not supposed to use your mobile phone near priority seat. The announcement tells you that radio wave emitted from the phone may interfere with heart pacers.

Which side of escalators should you stand?

This is an interesting trivia to observe in Japan.

In Osaka and surrounding areas called Kansai or Kinki, people stand on the right side of escalators and let others in a rush walk up and down the left side.

In all other parts of Japan including Tokyo, it is opposite.

Interesting thing is, Kyoto, although it’s in Kansai area, chooses to follow majority. They stand on the left side.