You can’t miss the temporary Space Invaders VR Games at Yodobashi in Osaka if you are visiting Japan in 2018 or in January 2019!

They have 3 AR games and 1 gigantic game of Space Invaders available. 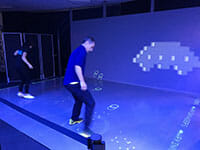 In this VR game, you kick and shoot the ball to destroy invader ships on a virtual gaming floor.
Strike back the massive Invader attacks with your feet! 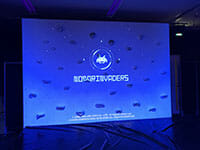 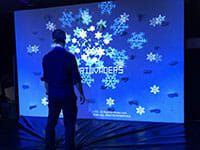 You will love this unique combination of bouldering and Space Invaders.
You climb up the wall to reach the invader ships and slap them with your hand.
Climb, hit and fight back the Invaders!

You’ll dance to the rhythm with up to 3 other players in this VR disco floor.
Don’t forget, you are still fighting against the invaders while dancing!

If you go as a couple or a family, there is a discount available.

When you buy your tickets at this ticket machine, use two buttons at the bottom; 480 yen for one game and 1600 yen for a set of four games. 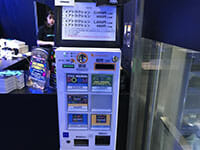 If you don’t want to waste your time and money, watch videos above before you go. It will give you the idea of what these two games are about. I took them when I visited there in August, 2018.

They sell some Space Invaders 40th anniversary special merchandise at this pop store. 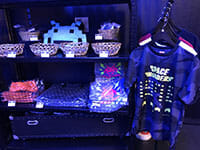 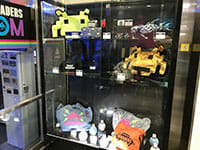 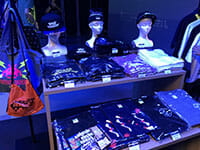 The design of “Invader 1978 Camouflage T-shirt” is really cool!